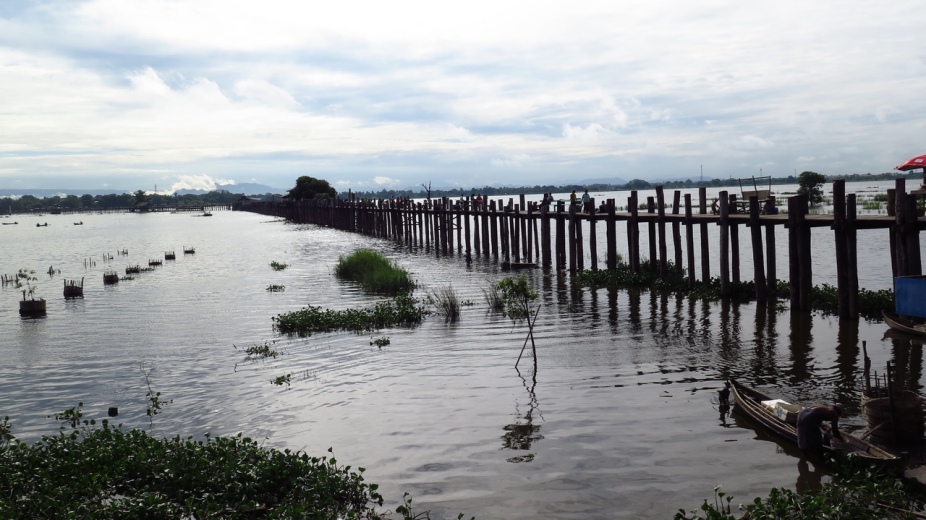 The Irrawady river in Myanmar (formerly known as Burma) is the country’s largest river flowing from North to South and also a commercial waterway. Yes, the country flourishes along its banks. What better way to experience Myanmar. Towards the latter part of the Monsoon, we embarked on a 3 night cruise on the river on board The Strand.

The Strand on the Ayeyarwady

The cruise begins from the Amarapura township in Mandalay city. Amarapura was one of the capitals of Myanmar. You are initiated straight away to experience a pride of Myanmar, The U-Bein bridge.

The bridge is named after a gentleman of the same name who served as a clerk to the Mayor of Amarapura. Facts and History behind the bridge

In the past, Taungthaman Lake was a natural reservoir that would fill during monsoon season along with the Irrawaddy River’s rising water levels, and see waters recede in the summer months.

Given the extreme humidity, wear light clothing, a sun hat and of course plenty of the locally used sunscreen – The Thanaka. A round trip on the bridge (2 miles/3.2 kms) by foot is free of charge and offers a fine glimpse in to the daily lives of people living around the lake. These days with tourist influx, a number of joints selling souveniours and local snacks have come up. Yet, the place still feels authentic while the people are slowly discovering that that their country is now on the world map. 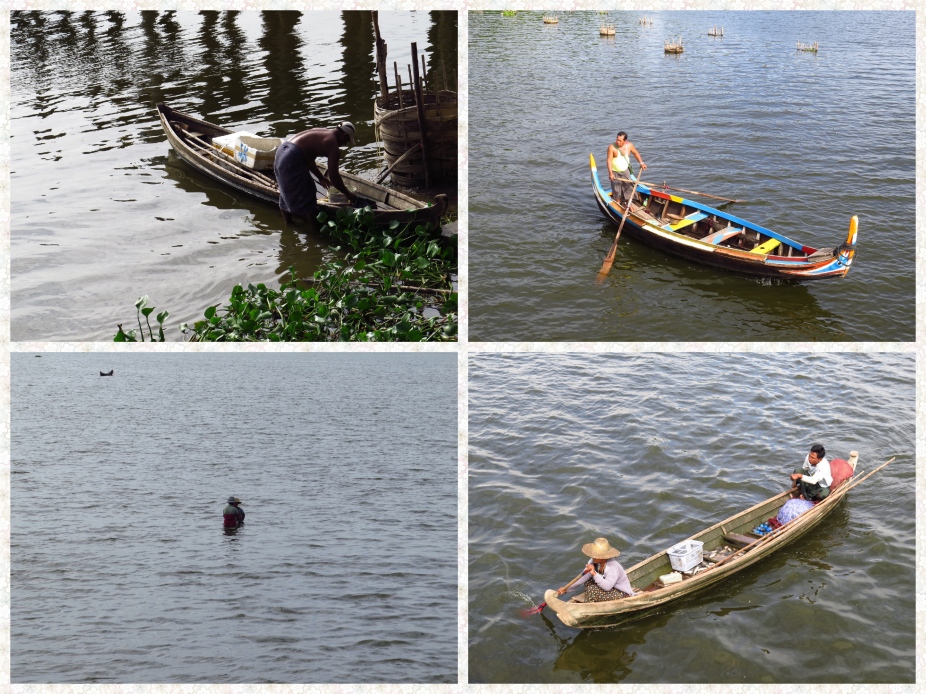 Fishing is the most lucrative occupation for residents living on the periphery of Lake Taungthaman. Solo fishing, Family Fishing, and Sitting on tubes for small catch. 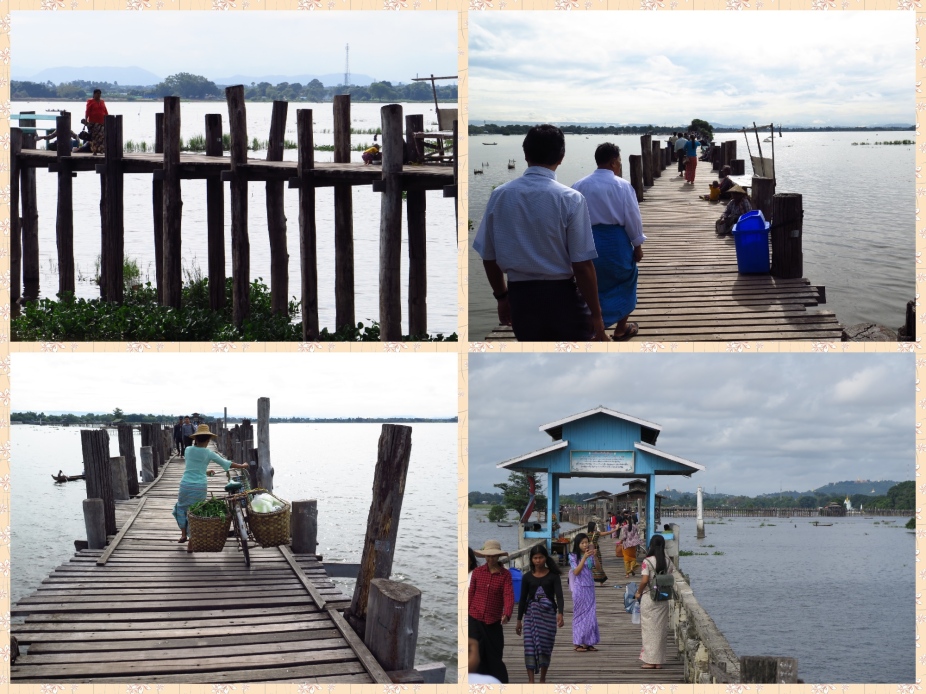 Students going to the university on the western side of the bridge, Vegetable sellers, Daily wagers, Government officers, Contractors and of course very well trained tourist guides traverse the bridge everyday.

If you cannot make it from one end to another in the sweltering sun, the builders very thoughtfully erected small rest points along the length of the bridge. Bite in to a spiced mango while resting and enjoying the waft of cool breeze blowing across the Taungthaman lake.

Floods have prompted replacement of wooden pillars with Concrete ones at certain places. Presently undergoing conservation works – Department of Architecture at Mandalay Technological University, the Department of History at Yadanapon University and officials from the Mandalay Department of National Museum and Library in cooperation with three wood conservation experts from Germany and an expert in conservation management.

Conservation works are regularly carried out on the bridge by replacing the wooden sleepers. All efforts are afoot to keep this Heritage structure the way it was built. 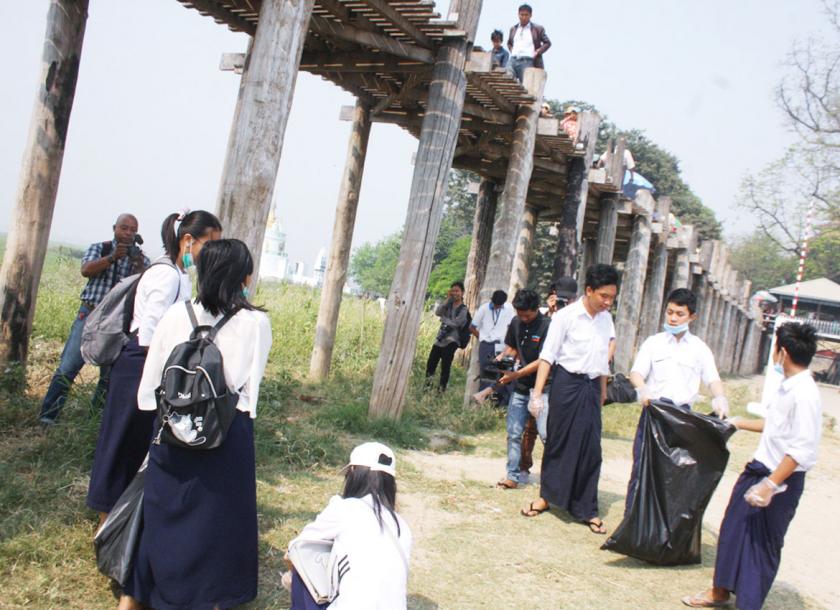 Students lead the way towards bringing in a culture of cleanliess. Here they are seen participating and leading a cleanliness drive along the banks of the U-Bein bridge.

U-Bein bridge brings an assortment of experiences. Cheerful youngsters wanting to take a snap with you, tourist souvenir sellers, photographers, local snack sellers and of course people who go about their lives caring two hoots of who is around them.

Fresh catch from the lake pasted with spices and fried – include shrimps, crabs and fresh fish. Along with this, there are stalls selling tropical fruit. These are usually mixed in the form of a salad spiced up and served. Mangoes, papayas, watermelons are popular. Steamed groundnut is another delicacy and a perfect accompaniment when taking a break in the rest house.

The choices are in front of you. The traditional bark of a tree ground in to a paste called Thanaka has been used by the Burmese for over 2000 years as a natural sunscreen. This is placed at almost all points across the country for people to use free; even in 5 star hotels. Once you apply this, the Sun hat option fades.

Students dominate the bridge and they dont miss an opportunity click a snap with tourists. They are friendly and look colorful in their local dress. The Men wear a Longyi and a Taipon for a vest where as the ladies wear a Thummy. The Thummy fabrics vary with various regions of Myanmar. Flip Flops are the most common footwear.

Travelling to Myanmar is now a breeze. Number of airlines fly in to Yangon with a single stop at any popular hub. Mandalay and Bagan are well connected from Yangon.

Tourists can check visa requirements on The Myanmar eVisa website. This is a government website and one can apply online for an e-visa. Check out for countries for whom Visa is provided on arrival. Indians can now apply for visa upon arrival. A recent government order to this effect. However, as a travel best practice it is always wise to utilize the e-visa facility offered. One however has to be careful while entering the passport details in to the Visa application form. Mismatch very clearly results in deportation.

Cheer up! That is really a remote possibility. We will next explore the Amarapura township.